Anyone can just slap-on the basic bolt-on modifications and call it a day, but being more thorough and completing the entire picture is more satisfying. A prime example of discovering the love of being thorough in a build is Jaemeson Gan’s 2005 Black Cherry Mica RX-8 Shinka from Los Angeles, California. 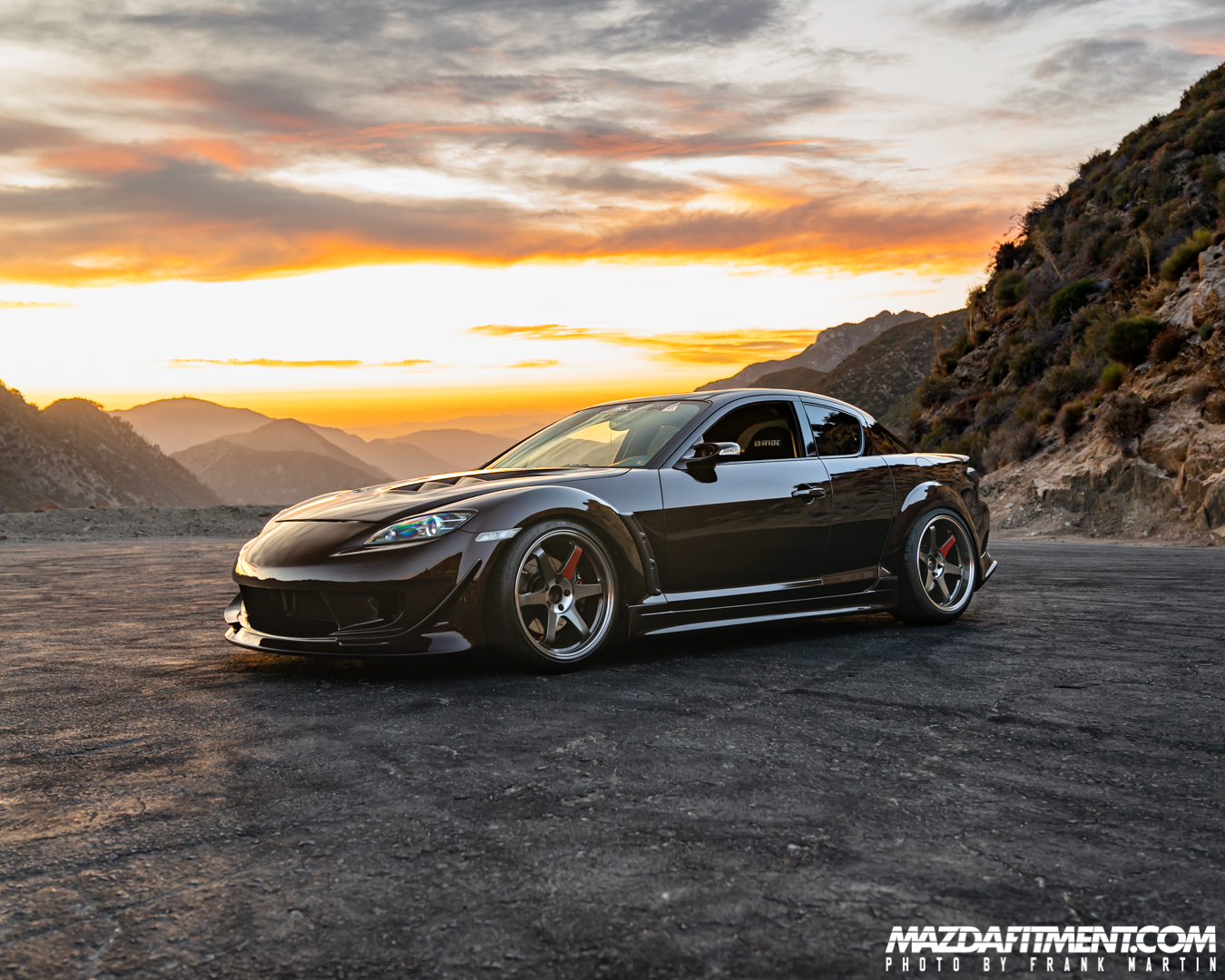 What made you get this chassis? Did you come from a different car before this?

“I actually had no intentions of buying an RX-8. My first car from high school is a Honda Element which is still currently my daily. Coming from a Honda background, I’ve always wanted an S2000 or an RSX Type-S. One evening, my dad and I spotted our neighbor down the street selling her RX-8. Although I was against it, he brought up the idea of buying it for himself as a weekend car. I suggested the cars I previously mentioned from earlier, as well as an RX-7 as another option, but he rejected my recommendation and was set on the RX-8. Fast forward a year later, he gave me the opportunity to buy it from him. Still stuck without a manual car, I decided to bite the bullet and take over ownership…” 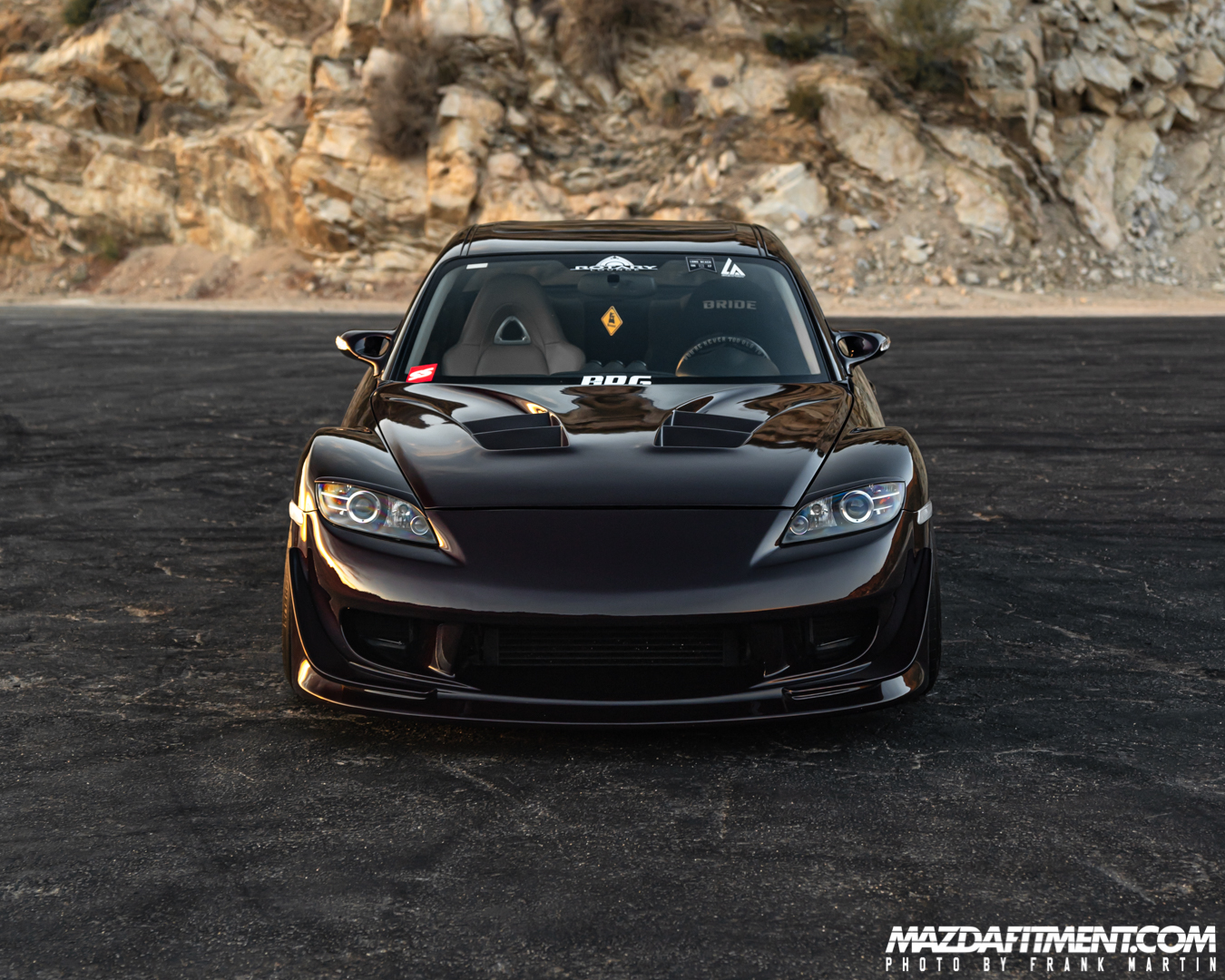 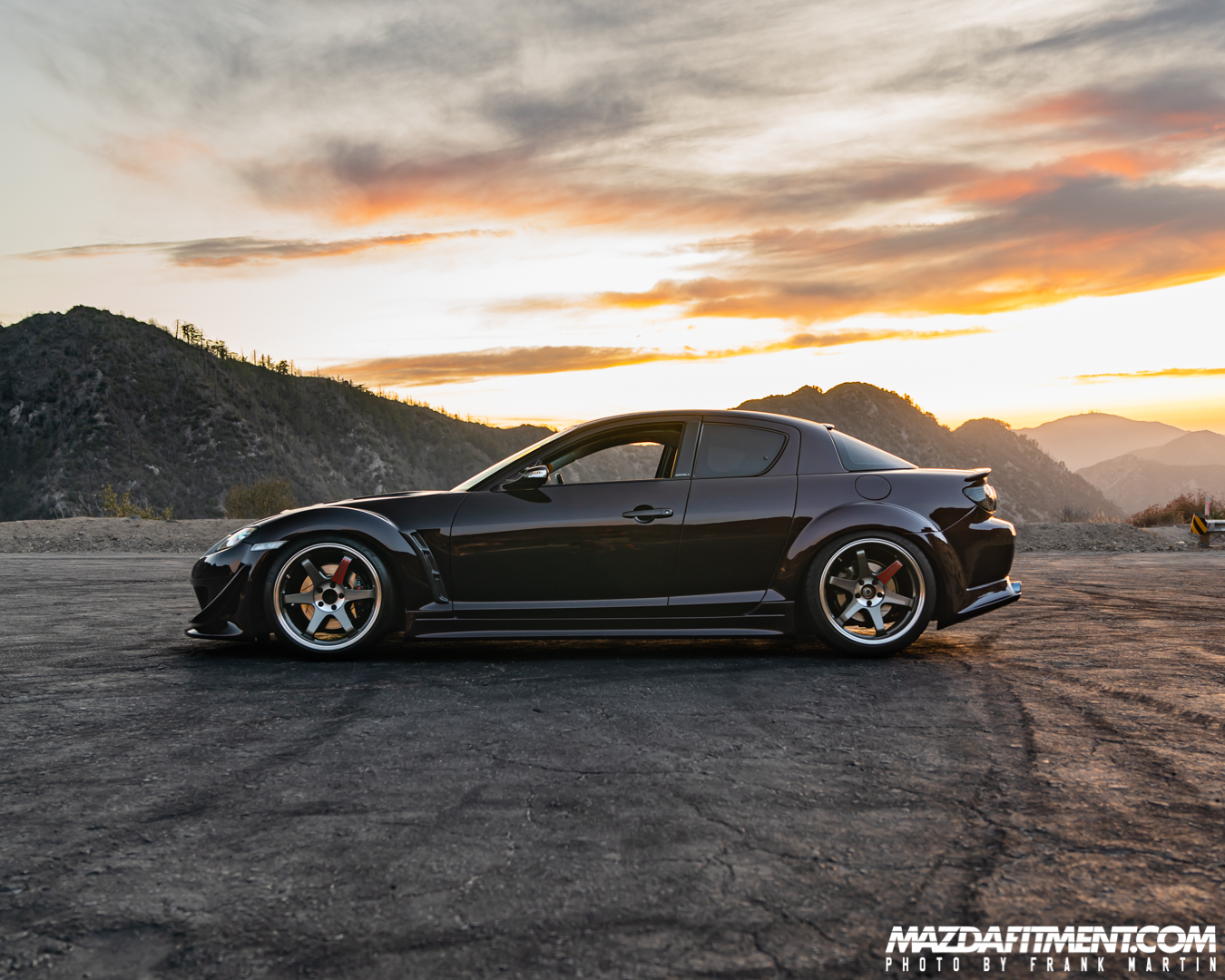 “I’m not really fond of the extremely round body lines of the RX-8. Given how limited the RX-8 aftermarket support was at the time, I looked up ideas on Google, RX8Club, etc. as a starting point for my build. Initially, I went for an OEM+ look by adding wheels, a front lip, side skirts, and a rear bumper valance. This worked for a while, but I eventually grew tired of still looking stock….One evening, I decided to go to a local rotary meet nearby. I met my now close friend, Greg Sanchez who also owns the same car as I do. Little did I know at the time, that his RX-8 is fully decked out with an INGS+1 body kit and a turbo. I was inspired by the thoroughness of his builds, and learned that there’s a far bigger world in modding out there other than bolt-ons. I attended my first SevenStock with them in 2013, which is the day I got to meet Jesse Baez. I was mesmerized by the Vertex Lang front that he has on his car, I started researching other cars that have a similar style and came across Dennis To’s silver Vertex Lang RX-8 as well. From that point on, I made my decision on pursuing this look.” 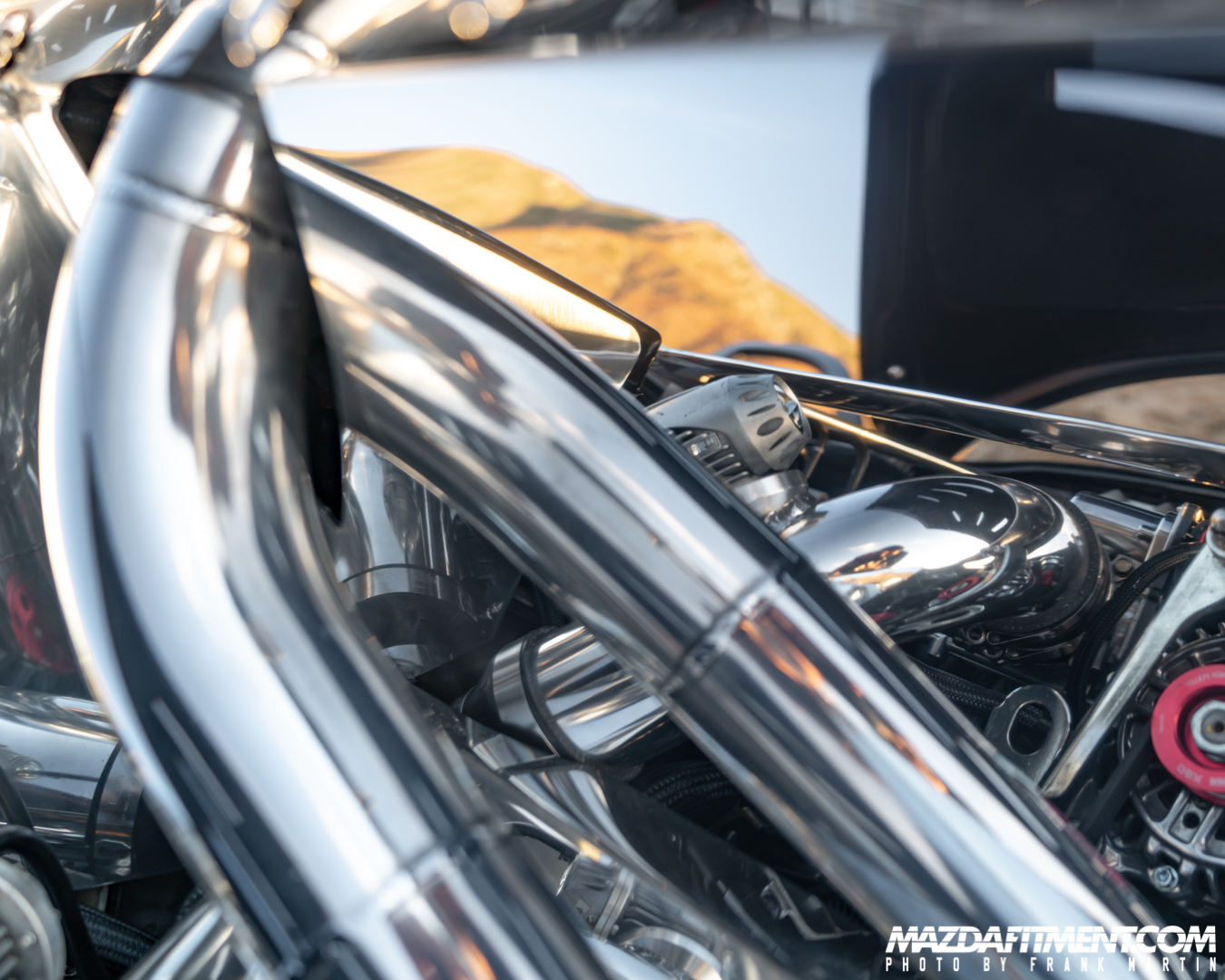 “…I eventually felt that it was also time to match the look of the vehicle with some decent power. Turbocharging was the last thing on my mind given the nature of the Renesis motor. Thanks to the help of my friends, along with plenty of research, we managed to successfully get the car running and drive-able; we also cleaned up the engine bay during the install process by cleaning up vacuum lines, polishing all the parts, and tucking all the electrical harnesses…As with most enthusiasts, a lot of us suffer from the mod bug and always look for other ideas on how we can further push our builds to stand out. I was given the opportunity to showcase my CarShopGLOW tail lights by David Do from Final Form USA. Seeing their time attack style builds also gave me push to try to add a little more aggressiveness to my car while maintaining a street friendly look. I made changes to the smaller details by adding carbon fiber accents, an aggressive hood, and to top things off, 19” TE37s for a timeless look. I’m at the point where I can say I’m truly satisfied with how the car currently looks. I do plan on making additional minor changes later on, but my main focus now is to just drive and enjoy the car.” 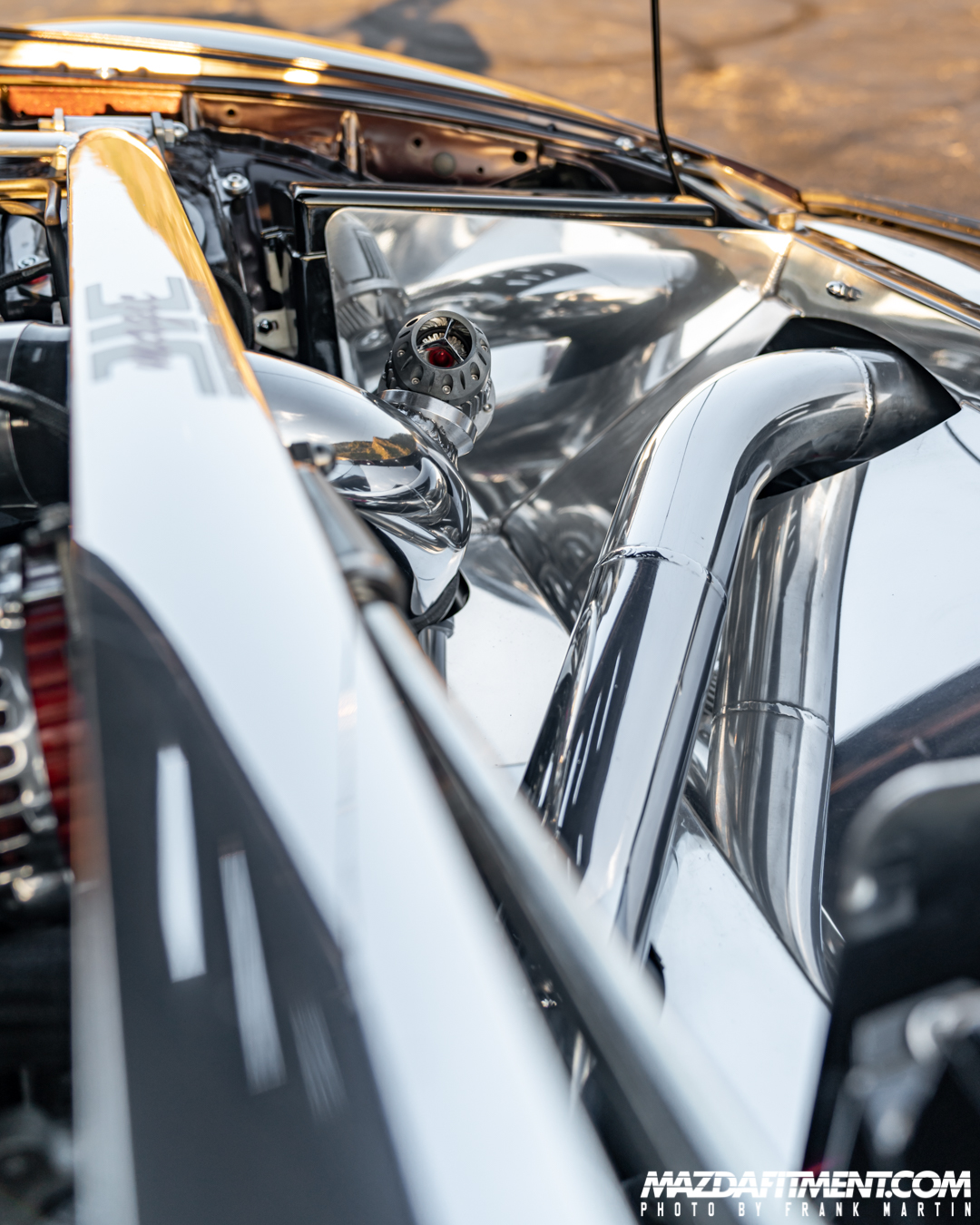 Biggest challenge with the engine bay/modifications you have done?

“Definitely the turbo install. We spent about a month trying to plan out how we exactly want the engine bay to look. What made it really challenging is the lack of room to install everything; a good amount of custom fabrication was needed to finish everything.” 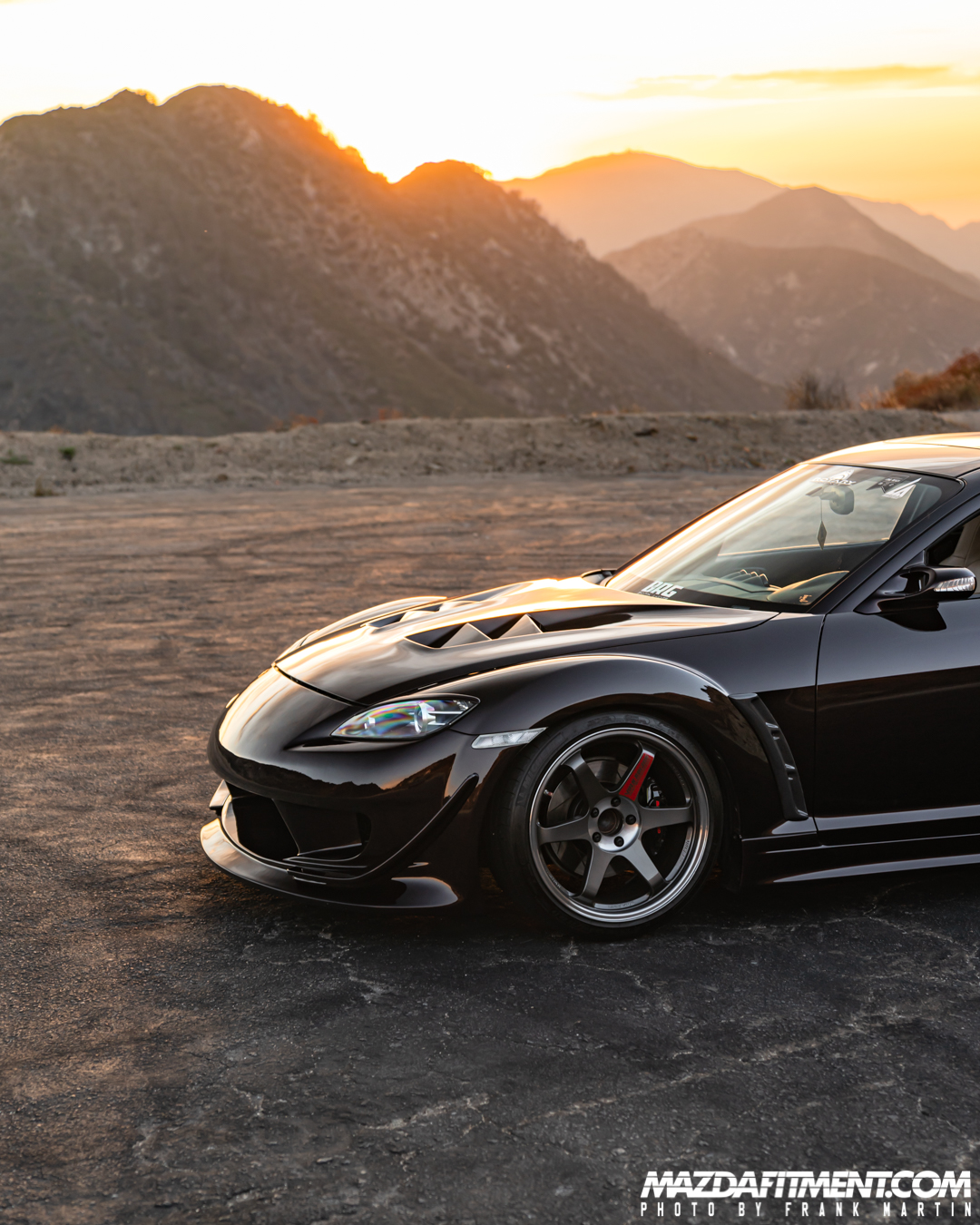 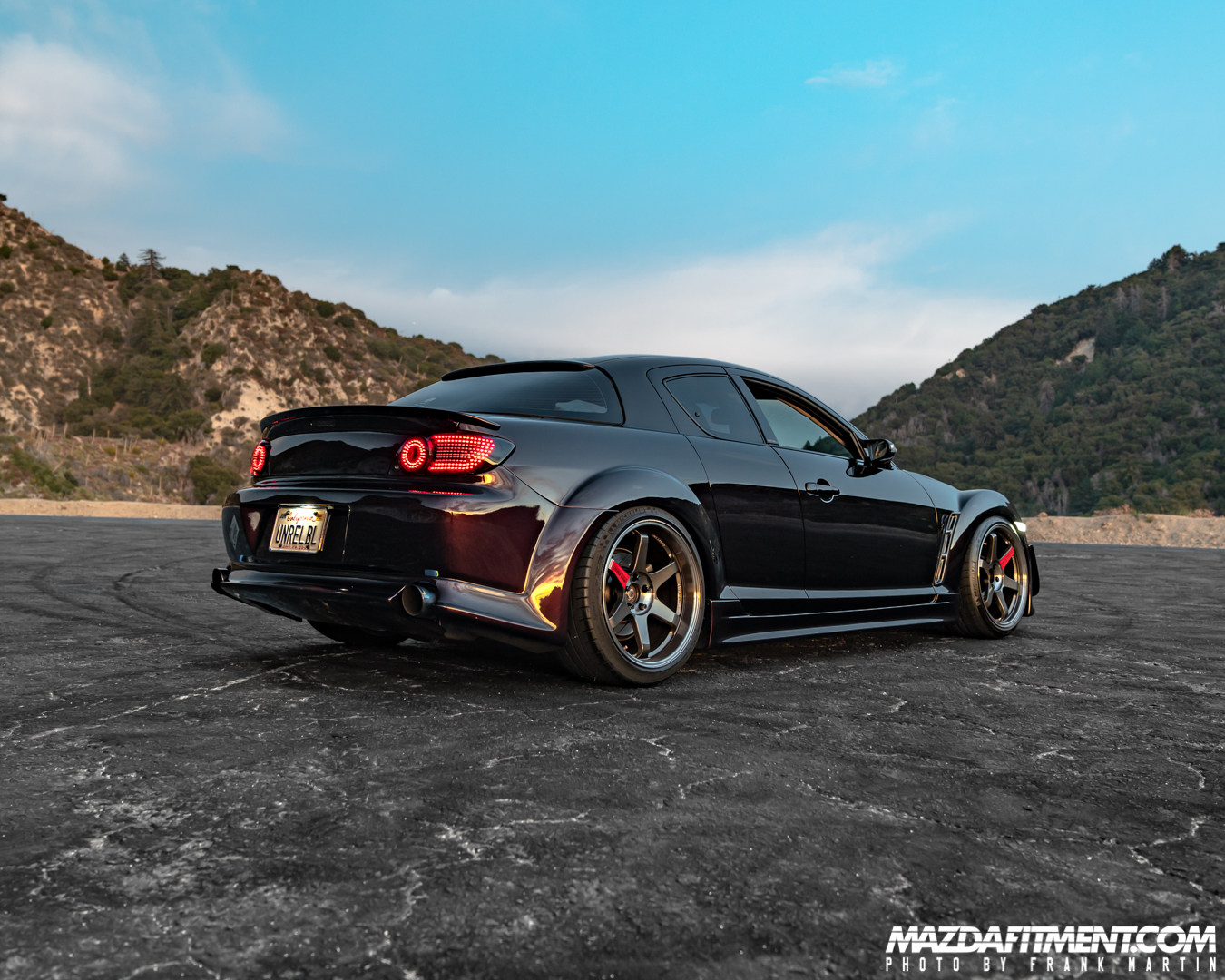 We love seeing TE37s on nearly anything. Why did you decide to go with those Volk Racing wheels? Anything else you would of gone with?

“I explored other options, but kept finding myself back on wanting the TE37 SL. I initially wanted a set of Work T5R 2P. Other options I also considered were Work CR 2P, Work Equip, and Blitz Type 03. I thought of what I would be happier with long-term, and the Volks always came to mind and were readily available. The tipping point as well was the pressed graphite finish, I’ve always loved how they look; it also compliments darker paint colors as well which is what made me decide on purchasing them.” 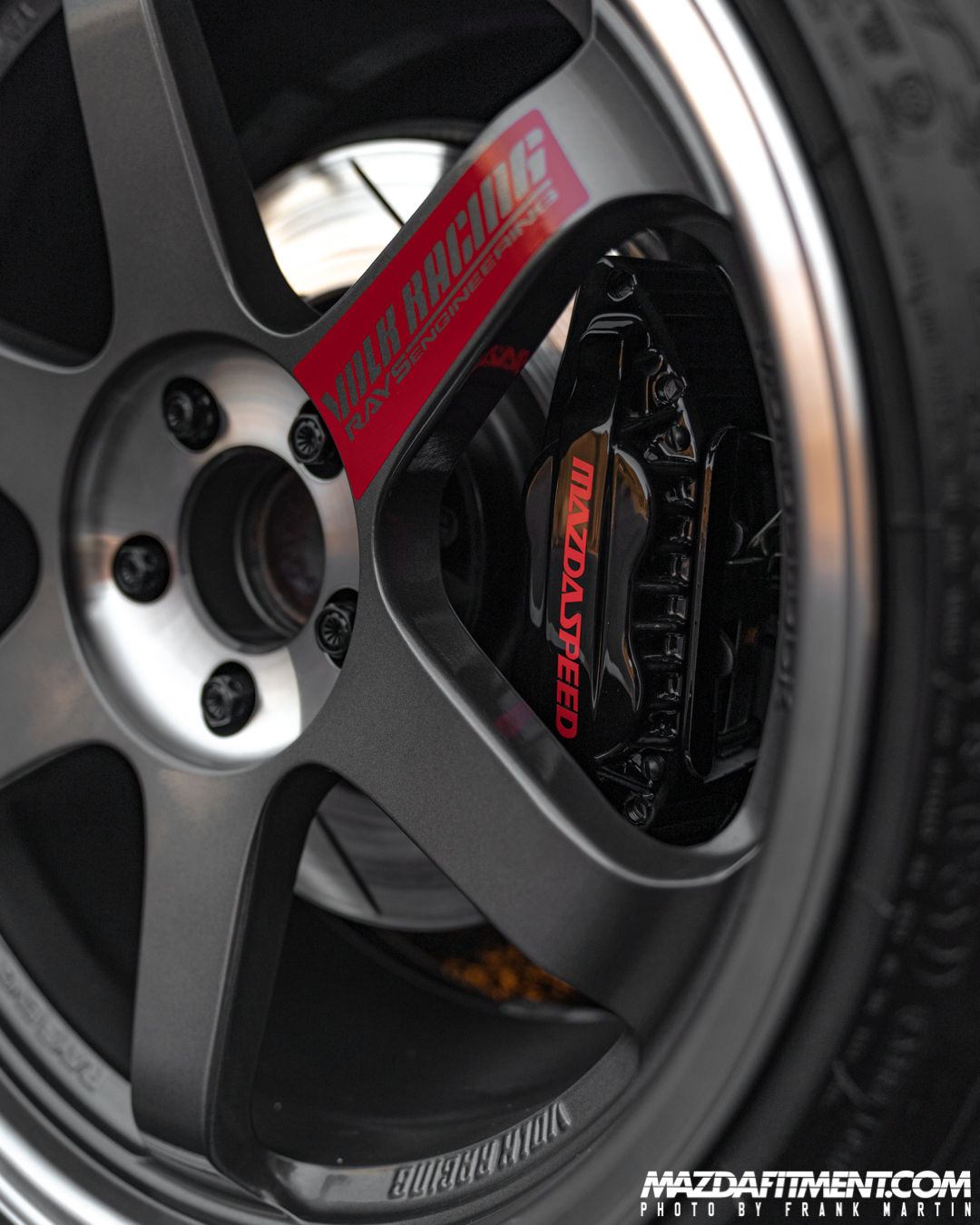 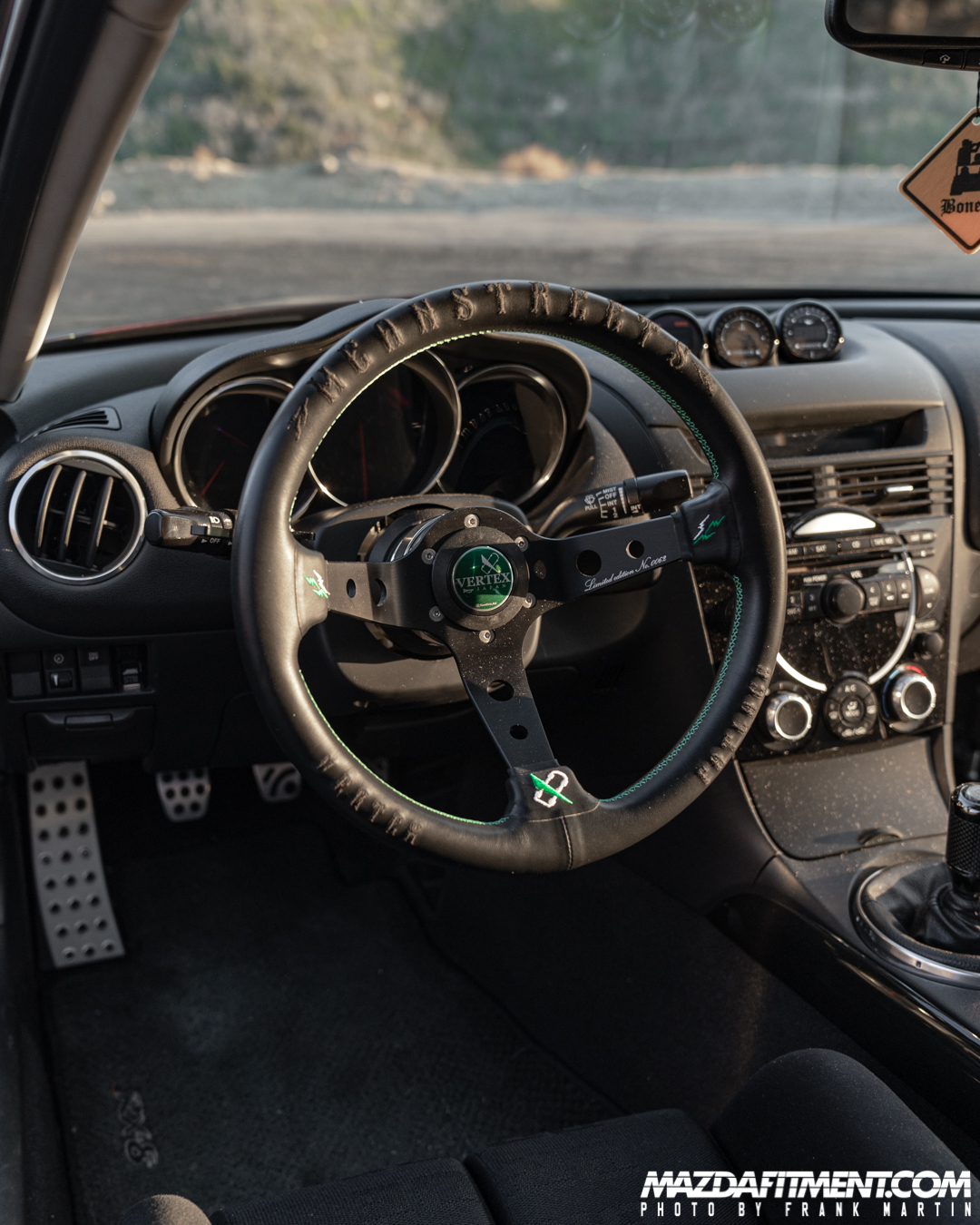 Compared to generations of RX-7, the RX-8 got a lot of hate for a number of reasons. Since you have wanted a RX-7 in the past, and having enjoyed the RX-8 now; how would you comment on that hate/comparison to the RX-7 generations?

“I do believe that a majority of hate towards the RX-8 was due to its huge role of fulfilling the shoes of the FD3S RX-7; it also isn’t the easiest platform to make power out of in comparison to its predecessor. Although that stigma will never go away, I think over the years, more people are giving the RX-8 a chance and are discovering the potential it has to be a great tuner. One thing I would like to add as well is that, a majority of car enthusiasts today seem to always compare newer cars to their 80s-90s counterparts. This has made it challenging for them to accept their successors, and I think people will appreciate newer cars more if they let go of that and just enjoy the new options available to us.” 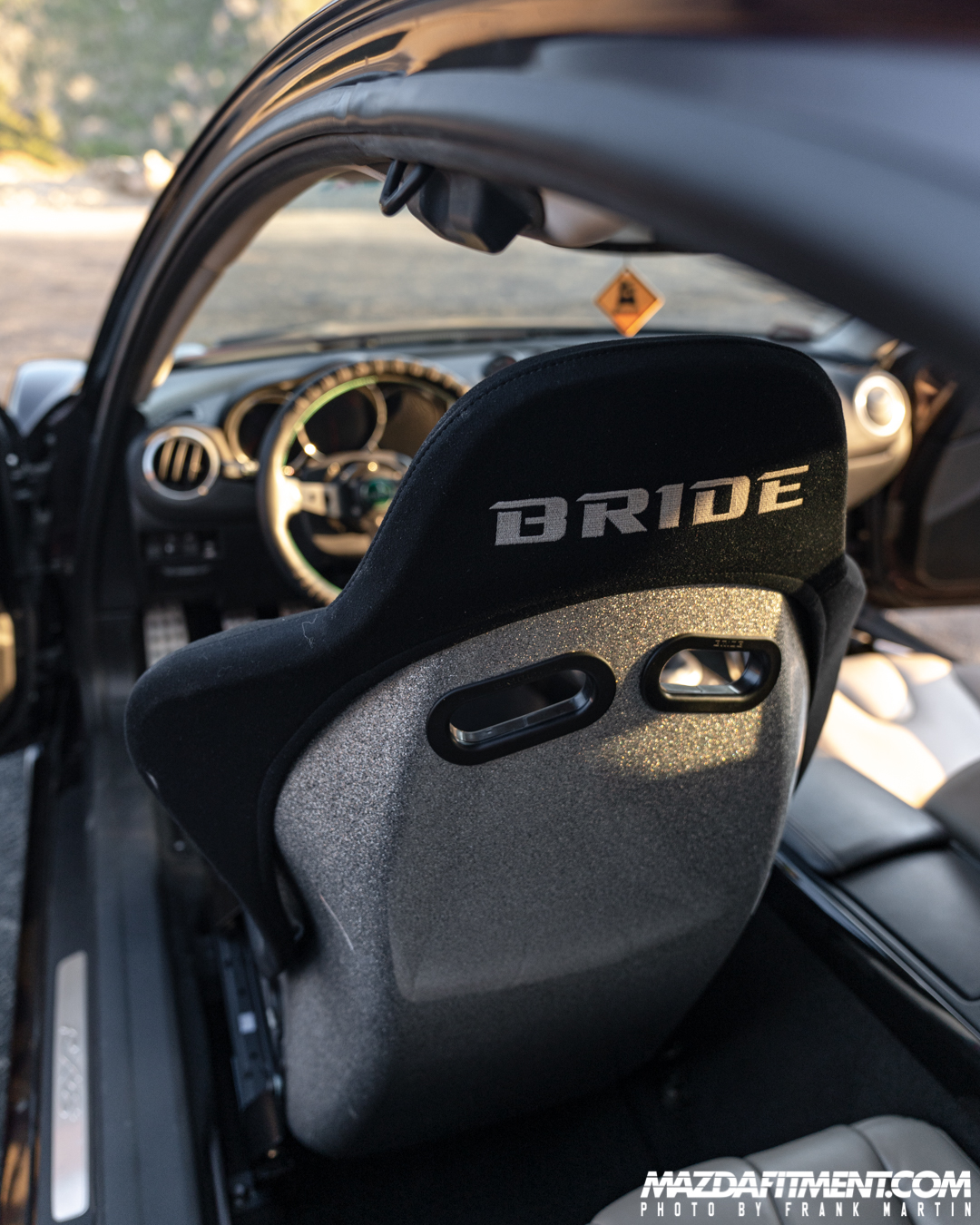 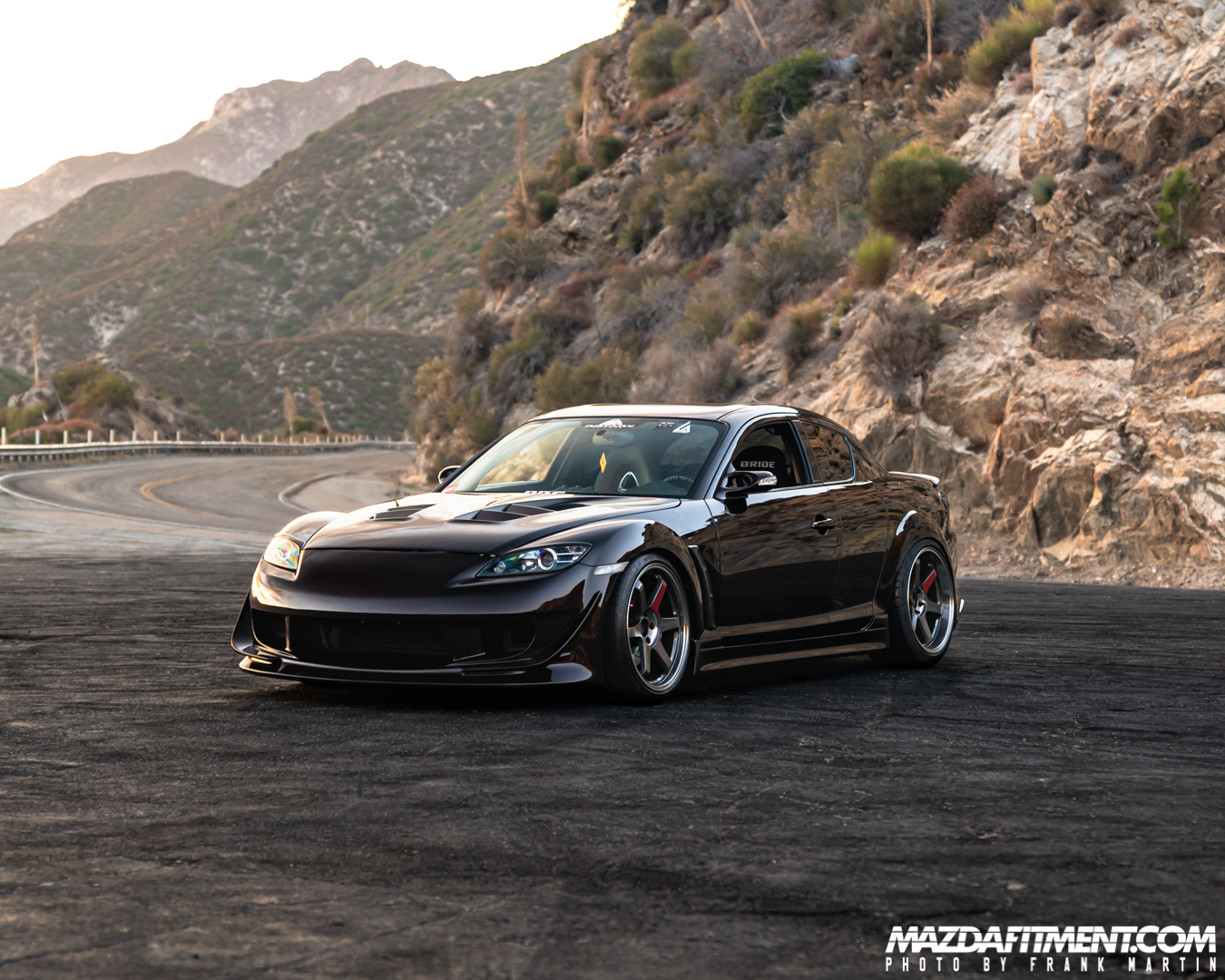 “Special thanks to my friends and best group I could ever ask for, Rotary Lounge, especially Greg Sanchez for helping me with my build since day one. My car wouldn’t be anywhere near its current state without his help. Aron Cranford from Ace’d AutoWorx for doing an awesome job on customizing and fabricating all my parts. Armando Hernandez for always doing great body and paint work. Also shout out to David Do from Final Form USA and Ken Suzuki for giving me the opportunity to showcase the tail lights and being supportive of my build. Last, but not least my friends from BRG, especially Boneout Ben, thanks for welcoming me like family and being supportive of our passion for our hobbies. If there is anyone I’ve missed, I do apologize, but you guys know who you are.”

And we would like to thank Frank for capturing this, and Jaemeson for letting us share this with everyone. Enjoy. More pictures in the gallery below. 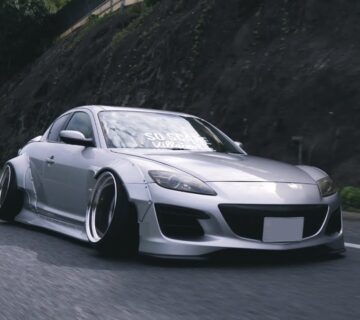 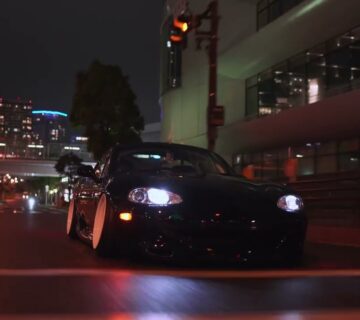